The Grand Island Public Library (established in 1884) has a long and strong heritage of service to our community, in large part due to members of the Abbott family. This family’s influence began with Elizabeth Abbott, one of the first library board members who served a total of 48 years. She influenced the Women's Suffrage Society to give its treasury balance to the library for book purchases. Later she was instrumental in President Theodore Roosevelt’s participation in the 1903 groundbreaking for the Carnegie Library. (standing in the center of this picture). 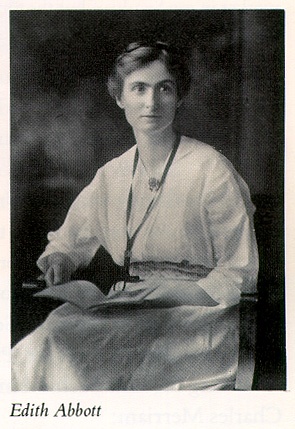 The Abbott legacy continued with her daughter Edith Abbott (1876-1957), a Grand Island native and a pioneer in American social work education who left the bulk of her estate to the library.  The Edith Abbott Memorial Library has been our home since 1974 (original opening photos shown - the library was expanded and renovated in 2007).

In addition, she left a trust for a collection of non-fiction books in memory of her mother.

In honor of this special legacy, on September 14, 1992 the Grand Island Public Library Foundation, Inc. became the original sponsor of the Abbott Sisters Project with another Grand Island native, John Sorensen as project director. The original project was a book about Edith and Grace Abbott. This project has also evolved into a video documentary as well as other important educational offerings. Work on all aspects of this project is continuous and ongoing under the umbrella of the Grand Island Community Foundation with the library as a valued partner.

Among this project’s original goals:

In project director John Sorensen’s proposal for the video documentary: “We are preparing to make a video profile of Grace and Edith Abbott – remarkable sisters who were born to a pioneer family in the small Nebraska village of Grand Island in the 1870’s, and who grew up to lay the foundation of some of America’s most important social changes. The Abbott sisters’ story is an adventurous tale of two brave individualists, of how they lived and worked among the poor of this country and later earned crucial positions in government and education – very rare achievements for women of the 1920s ... In our video we will emphasize the unique collaboration of these two sisters whose skills so beautifully harmonized and complemented one another’s. We show the scholarly Edith paving the way, doing the first experiments, fostering her sister’s interests – and Grace putting Edith’s lessons into action.”

One significant aspect of this project is housed in the Edith Abbott Memorial Library: the Abbott Sisters Research Center. This center is a collection of books and articles by and about Edith and Grace Abbott. Items in this center have been donated by project director John Sorensen, have been collected over the years by the Library, or were from Edith Abbott’s own personal library and donated to the Library after her death. Amateur and professional researchers far and wide are encouraged to make arrangements to access this center by calling 308-385-5333 or emailing refdesk@gilibrary.org.

Another annual event is Edith Abbott’s birthday party, a Victorian tea held at the Library for over 100 third and fourth grade girls on or around Edith’s September 26th birthdate. Many of the girls come dressed in Victorian costumes and are escorting their dolls. Everybody learns all about Edith Abbott, her legacy, and how to properly behave at a tea party before drinks and foods are served.

In March 2002 the Grand Island Public Library Foundation, project Director John Sorensen, and the Nebraska Children and Families Foundation worked hard to create a statewide Abbott Sisters Day which is now proclaimed by the Governor each year.

In June 2001 Nebraska Governor Johanns was the featured speaker at the dedication of sculptures of Edith and Grace Abbott. A donation to the Grand Island Public Library Foundation of sculptor David Young’s creations made this event possible, attended by over 200.